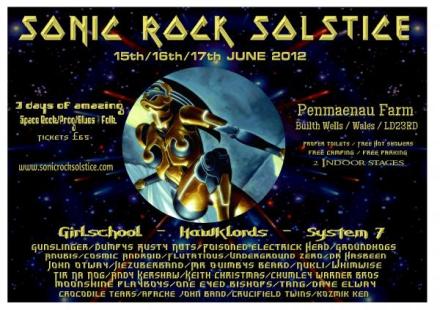 Now in its fourth year at Penmaenau Farm in Builth Wells (just above the Royal Welsh Showground), Sonic Rock Solstice returns this summer. It promises a three-day extravaganza of space rock, prog, blues and folk – with ‘camping, parking, proper toilets, and hot showers’ chucked into the bargain – for the refreshingly reasonable price of £65.

As in previous years, Hawkwind’s shadow hangs heavy over 2012’s incestuous lineup. Hawklords, Gunslinger, The Groundhogs, and Dumpy’s Rusty Nuts all boast personnel links to the band, and much of the rest of the roster deal in a similar brand of 70s psych-prog. On the Saturday, all-female rockers Girlschool bring a harder New Wave Of British Heavy Metal edge to proceedings, and techno-tripping duo System 7 complete the list of Main Solstice Stage headliners, providing a dancier soundtrack to the festival’s final night.

The amount of flowing grey hair and tie dye on show suggests this is one for the hippy stalwarts rather than ironic revivalists, but those looking to journey back to prog rock’s 70s heyday would be hard pushed to find a better vessel or a more picturesque backdrop at this price. Climb aboard, earthlings. 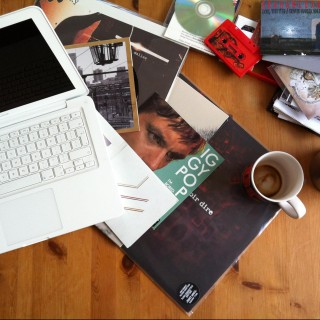 This is a blog of my collected music writing for Rock Sound, Buzz Magazine and The Joy Collective. All have appeared either in print or online - sometimes in edited form when The Man™ has gone power crazy with his red biro. [Those interested in my work as an actor can follow me on Twitter below and follow the links from there.]

By Publication or Category